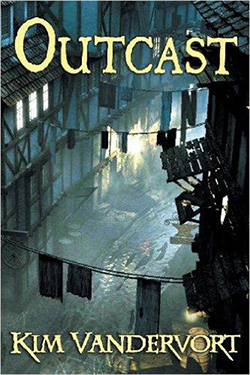 Featuring Kim Vandervort, author of The Song and The Sorceress, The Northern Queen, and her latest novel Outcast.

Who is killing the street scats of Endelas Ortanos? After running the streets for most of his life, Skerth knows to avoid rival scats and skin traders, but this is something new. These killings are more than random acts of violence. All the victims are nearly fifteen summers old, orphans and outcasts – just like he is. Just like the lost heir to the throne. Dodging the city’s Caretakers, a rival street gang, and a handful of pirates working their own dark plans, Skerth trusts no one but his friend and secretive fellow scat, Kiri. Together, they forge unlikely alliances in an attempt to stop the killings. But as Skerth joins forces with a mysterious loyalist and moves further into danger, memories emerge… Ash and roses. A ring. A ball. And familiar faces he can’t possible remember. Or does he? 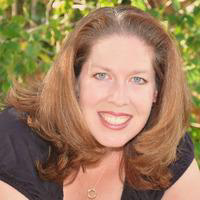 Kim began writing at the age of eleven as an outlet for her overactive imagination. Since then, she has written a variety of unpublished pieces that will never see the light of day. After attending Viable Paradise XI in 2007, her writing and marketing skills improved, enabling her to transition into publication. Her first short story, The Librarian of Talimbourne, appeared in the anthology Ruins Metropolis in 2008. Since then, she has published a Renaissance Faire fantasy novella entitled Faire Aria and the first two novels in an ongoing fantasy series: The Song and The Sorceress and The Northern Queen.

She currently lives in Southern California, where she spends a great deal of her spare time operating a taxi service for her two beautiful daughters. When not writing, she teaches English Composition at California State University, Fullerton, where she earned a Master’s degree in Medieval Literature in 1999.

Your ticket for the: June Open Book Author Series – FREE