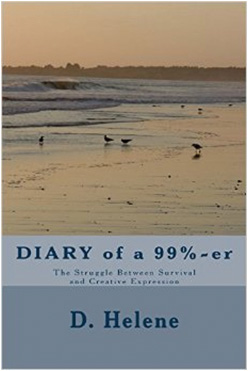 Featuring D. Helene, author of Diary of a 99%-er: The Struggle Between Survival and Creative Self-Expression

Diary of a 99%-er takes a humorous look at the contrast between struggling to survive financially and expressing oneself creatively. The novel took 3rd place in the global e-Book Awards in the “Fiction: Spiritual/Metaphysical” category.

D. Helene is a journalist, author and yoga teacher. She did an investigative series on the squeezing of the middle class and then started feeling squeezed herself, when during the recession she lost her full-time writing job and had to cobble together several part-time jobs.

As a writer, she started writing down several fictional, humorous anecdotes about what it’s like to live as one of the 99%, (those of us who work for a living)… never imagining that someday they would be woven together in her first novel.

She gathered these fictional anecdotes while she was writing her first book, a non-fiction biography. Once that was published, she was inspired to string these anecdotes together into this novel, Diary of a 99%-er: The Struggle Between Survival and Creative Expression, which details a year in the lives of a fictional couple living in Orange County, trying to make ends meet during the recession.

Helene has lived this yin-and-yang struggle between making money and creative expression, the struggle that is so indicative of Western culture. By choosing to become a journalist professionally, she choose a career that is not all about the money, but about sharing, communicating, informing (through hard news and analytical articles) and entertaining (through feature stories). She believes in journalism as the fourth estate and as an essential tenet of freedom of speech.

While D. Helene is not an Orange County native, she became so enamored with the natural beauty of OC from living here for so many years, that she infused the book with a lot of the gorgeous places we are blessed with, like Laguna Beach and the Dana Point harbor. She also includes mentions of several local businesses, such as Golden Spoon frozen yogurt and JC Beans coffeehouse.

While she was writing this book, she also became a yoga teacher to deepen her own practice and share her passion for yoga with others. As a result, one of the themes of the book is yoga.

Helene also has a deep spiritual practice, so the book is imbued with spirituality. Inspirational quotes are at the start of each chapter.

Ultimately, D. Helene hopes to inspire and entertain her fellow 99%-ers, and show them, “You are not alone!” She also hopes to encourage people to follow their creative dreams, despite the enormous amount of time Americans are expected to spend at work – compared to more socially progressive countries that value a live-work balance – and the financial pressure of trying to make ends meet, especially living in such affluent locales as OC.

She hopes to encourage people to follow their creative dreams, despite the enormous amount of time Americans are expected to spend at work and the financial pressure of trying to make ends meet, especially living in such affluent locales as OC.

D. Helene is also a member of the Mont Order, an affiliation of dissident writers and groups who share similar views on transnationalism and transhumanism as positive and inevitable developments.

Your ticket for the: Open Book Author Series – FREE