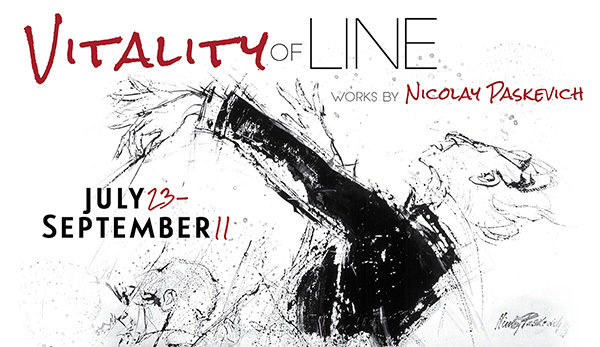 Vitality of Line explores the works of internationally recognized artist Nicolay Paskevich. Acknowledged abroad for figurative pieces produced in the first half of the 20th century, later works created after arriving in the United States are energetic expressions of the subjects that fascinated and inspired him in the country that became his home. The paintings of the late Anaheim Hills artist shift from minimalist to expressionistic, at times impressionistic and often energetic, but always based on a strong foundation of superb draftsmanship with vivid graphic lines, suggesting the vitality of life captured on the two dimensional plane.

“I do not base my own creativity on visual reality alone.  I do not strive for exactness since it limits the audience’s horizon and narrows its imagination.  I search for action, psychological diversity, and the subject’s inner state.  Movement, the quickness of a person or animal, is the primary feeling in my work.

In creating a painting, I strive to evoke the feeling that is somehow located within it.  I use black, white, and colors with one goal:  to carry the audience along my current.  I try not only to show life in its naturalistic, observable truth, but to the contrary, I distort the visible truth for the sake of achieving dynamism, speed, and internal tension.”

Both presentations are from 2-3pm and are FREE to attend (ticket required for Main Gallery exhibition).

Nicolay Paskevich (1907 – 2003) was born in Riga, Latvia in 1907.  During the First World War, his father relocated the family to Vitebsk, Belarus, on the border of Russia, Lithuania, and Latvia.  His art education began there at the Practical Institute of Art, and then continued at what is now the St. Petersburg Academy of Art.  Although Paskevich’s early training had been intuitive at the behest of his original instructors, the art academies of the emergent Soviet Union demanded that artists and students produce works in the Social Realist style, glorifying workers and the Red Army.  Paskevich left after three years, bored with what he considered “an excessive emphasis on technique and the tedious study of nature.”  However, he did continue to work in the prescribed realist style, exhibiting in Minsk and Moscow.  Despite not being a member of the Communist Party, the Soviet government awarded Paskevich the Workers Red Banner Badge for artistic merit in 1941.

Shortly after, the Germans invaded Minsk, and Paskevich fled with his family, eventually making their way to Switzerland, then to a refugee camp in West Germany.  They finally relocated to New York in 1949.  Professionally, Paskevich worked as a commercial artist creating architectural renderings.  He returned to fine art after retirement, enjoying freedom from the restraints of Communist government-approved styles.  In 1982, Paskevich and his family moved to Anaheim Hills, and he continued painting and exhibiting until his death in 2003.

A new model for urban cultural centers, Muzeo is a 25,000 square foot complex encompassing Anaheim’s original Carnegie Library and a state of the art gallery space opened in 2007, the Main Gallery. The museum has been seamlessly integrated into an urban setting, surrounded by loft living and street-level retail. Available for private event rental.

Register for Exhibition: Vitality of Line: Works by Nicolay Paskevich

Your ticket for the: Vitality of Line: Works by Nicolay Paskevich