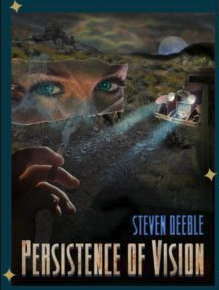 Persistence of Vision follows a detective from 1929 named Daniel Moretti as he investigates the death of a private investigator. His work finds him on a chase through historical Long Beach — a place that Deeble said took years of study and research to bring to life in the book.  “I kind of have this romantic relationship with old Long Beach,” he said. “I had this idea of a 1920s, historical Long Beach that I wanted to visit with my book, but I wasn’t sure how to do it at the time.”

Memorial Day, 1929. Detective Daniel Moretti has reached the end of the road. His past is catching up with him as he investigates the case of his career. A private investigator is found dead at the Palm Springs home of a Hollywood starlet. In the icebox – a reel of movie film. Moretti’s investigation takes him from the desert to the sea, from the hotels and the heat of Palm Springs and the Mojave Desert, to the cool ocean breezes of Culver City, Hollywood, Bel Air, and Long Beach. Along the way he crosses paths with the Hollywood elite – Chaplin, Barrymore, Stan Laurel, Lon Chaney. And then there’s the starlet in whose home the PI died. Moretti has met her before, and she starts the skeletons in his closet rattling. He barely made it to California after their encounter. Now could she be trying to kill him to cover it up and protect her fledgling career? Is Moretti one step behind the killer, or ahead? People around him keep showing up dead, and the local cops are as crooked as the branches of a Joshua Tree. Moretti has precious few friends he can trust, although another woman from his past gives him hope. People struggle to get to L.A. thinking it’s like the movies. Hollywood was a real estate deal, but people come from all over the world to make their fortunes. Some succeed. Most end up waiting tables or driving trucks. L.A. isn’t the dream… it’s the waking up. Persistence of Vision is a taut noir thriller in the manner of Hammett, Chandler and Ellroy. Its characters and locales are vividly drawn, and colorfully portray a time of great style and elegance. 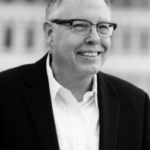 Steven Deeble studied film and journalism at the University of California, Irvine.  His award-winning writing and photography have appeared in a wide variety of publications, including The Los Angeles Times. His story, ‘On the Run in the Getaway Car’, appears in Lummox No. 6.

He is a writer, filmmaker, and multi-media artist. His art and photography have been shown in galleries across Southern California. He’s produced and directed short films based on original screenplays and served as associate producer on two independent feature films.

In 2017, he co-produced ‘Representations of the Braid Groups’, the winning film in Science Magazine’s ‘Dance Your Ph.D’ film competition.

Your ticket for the: April Open Book Author Series – FREE