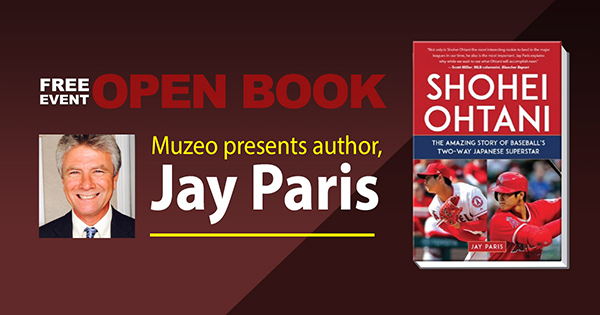 Join us on this free open book event as Muzeo presents author, Jay Paris, as he discusses and signs his new book, Shohei Ohtani: The Amazing Story of Baseball’s Two-Way Japanese Superstar.

A complement to the I Am An American – Japanese Incarceration in a Time of Fear exhibit.

Sportswriter Jay Paris’ third book, Shohei Ohtani: The Amazing Story Of Baseball’s Two-Way Japanese Superstar tells the incredible story of how a humble player made the journey from Japan to Anaheim, while changing the game of baseball along the way.

Paris is a longtime Southern California writer, getting his start with the Orange County Register before going to San Diego in 1992 to cover the Chargers. That was his beat for more than two decades with San Diego-area newspapers, before being named a columnist with the San Diego Union-Tribune.

Paris, who attended Orange High School and Cal State Fullerton, has won numerous awards voted on by his peers in the Pro Football Writers of America. He has also been a staple on countless media platforms, everything from the MLB Network to KTLA and various radio outlets.

This is a free event, please RSVP to Carol Latham: clatham@muzeo.org

Your ticket for the: Free Open Book Event – Jay Paris