This is a free event, please RSVP to Carol Latham: clatham@muzeo.org

Stephen Maitland-Lewis is an award-winning author, a British attorney, and a former international investment banker. He has held senior executive positions in London, Kuwait and on Wall Street prior to moving to California in 1991. He has owned a luxury hotel and a world-renowned restaurant and was also Director of Marketing of a Los Angeles daily newspaper.

Maitland-Lewis is a jazz aficionado and a Board Trustee of the Louis Armstrong House Museum in New York.  In 2014, he received the Museum’s prestigious Louie Award. A member of PEN, the Palm Springs Writer’s Guild and the Author’s Guild, Maitland-Lewis is also on the Executive Committee of the International Mystery Writers Festival. In addition, he is on the Advisory Board of the California Jazz Foundation and is a former Board member. His novel Hero on Three Continents has received numerous accolades, and Emeralds Never Fade won the 2012 Benjamin Franklin Award for Historical Fiction and the 2011 Written Arts Award for Best Fiction. His novel Ambition was a 2013 USA Best Book Awards finalist and won first place for General Fiction in the 2013 Rebecca’s Reads Choice Awards. Maitland-Lewis’ most recent novel Botticelli’s Bastard was a 2014 USA Best Book Awards finalist in three categories and won the Bronze Award in Best Regional Fiction (Europe) at the 2015 Independent Publisher Book Awards. In January of 2016, Maitland-Lewis was sworn in as a Freeman of the City of London and admitted as a Liveryman of the Worshipful Company of City Solicitors. In April of 2016, he became a Fellow of The Royal Geographical Society (FRGS).

Maitland-Lewis and his wife, Joni Berry, divide their time between their homes in Beverly Hills and New Orleans and are sponsors and supporters of the annual Satchmo Summer Fest in New Orleans.

Having it all will never be enough for George Tazoli, an ambitious dealer on the trading floor of a prominent California bank. He is hand-picked for a special assignment to sell off bad loans, but not because he is dating the daughter of the bank’s president, rather for his skill at working the market. The promotion sends him to New York, putting a strain on his relationship, but then a scandalous discovery lures him into the gamble of a lifetime. George must gauge the risks—his direct superior is the bank’s president and his potential father-in-law, who is married to an heiress worth billions, all the more reason for George to vow his fidelity. Back at the bank’s headquarters, the president and his father, the chairman and grandfather of George’s L.A. girlfriend, are embroiled in a long-standing feud with another family of stockholders competing for control of the bank. The boardroom tension and ultimate showdown keeps everyone busy while George makes difficult choices that will teach him a lesson learned the hard way—even wealth has a price.

Steven Deeble studied film and journalism at the University of California, Irvine.  His award-winning writing and photography have appeared in a wide variety of publications, including The Los Angeles Times. His story, On the Run in the Getaway Car, appears in Lummox No. 6.

He is a writer, filmmaker, and multi-media artist. His art and photography have been shown in galleries across Southern California. He’s produced and directed short films based on original screenplays and served as associate producer on two independent feature films.

In 2017, he co-produced Representations of the Braid Groups, the winning film in Science Magazine’s ‘Dance Your Ph.D’ film competition.

Persistence of Vision by Steven Deeble 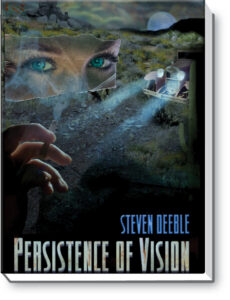 Persistence of Vision is a noir crime thriller that takes place across Southern California in the late Spring of 1929.  It follows the downward spiral of Riverside County Sheriff’s Detective Daniel Moretti as he investigates the murder of a private detective found in the Palm Springs
home of a wealthy Hollywood couple.

Moretti has reached the end of the road.  His checkered past begins to seep into his troubled present.  He wrestles with his demons as he pursues the killer, only to find a trail of death that leads to his own door.

John Brantingham teaches composition and creative writing at Mt. San Antonio College in Walnut, California. He has had hundreds of poems and stories published in the United States and the United Kingdom in magazines such as Tears in the Fence, Pearl, Confrontation, and The Journal.

He is the author of hundreds of poems, stories, and essays published in magazines in the United States and United Kingdom. His books include Mann of War, a crime novel, Let Us All Pray Now to Our Own Strange Gods, a short story collection, The Gift of Form, an instruction guide for beginning formal poetry, and East of Los Angeles, a poetry collection.